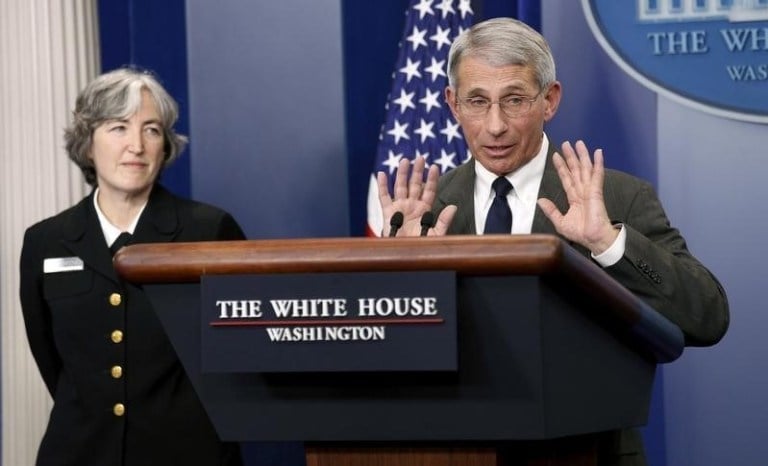 Déjà Vu: The WHO’s Handling of 2009 H1N1 Pandemic: “Deeply Marred by Secrecy and Conflict of Interest”

The Covid vaccine: simple facts staring us in the face

We and our ancestors have been lied to, over and over again, for the last two-hundred and forty-four years. And these Anglo-Zionist, inbred criminals, along with their political and media talking-head stooges, are still lying to us, 24/7/365. They are raping and pillaging us and our families every second of every day, in order to further their own criminally-despotic and heinous ends. And we continue to stand  idly by, like a deer caught in the headlights, while they destroy us and those we love.

How much longer? How much longer are we going to put up with this eugenics-driven bullshit? When are we going to finally stand up and SHOUT AS ONE, “Enough is Enough! No More of your inbred-psychotic bullshit, your never-ending propaganda and lies! We are taking back control of our own lives, and thus, we have no need of you vermin any longer! Be gone, scum of the earth!”?

Dr. Anthony Fauci: COVID-19 “May Turn Out to be Like a Bad Flu Season”. His Peer Reviewed Article Versus His Public Statements

Dr. Anthony Fauci and two co-authors published an article on March 26, 2020 in the New England Journal of Medicine.

Anthony  Fauci is head of the National Institute of Allergy and Infectious Diseases. In the article, linked below, he states that COVID-19 may turn out to be comparable to a seasonal flu or similar to two relatively minor flu pandemics in 1957 and 1968. It is estimated that seasonal flu kills about 500,000 people globally every year and the two flu pandemics he cited each are thought to have killed about a million people globally. Below is an excerpt of the article.

“On the basis of a case definition requiring a diagnosis of pneumonia, the currently reported case fatality rate is approximately 2%. In another article in the Journal, Guan et al. report mortality of 1.4% among 1099 patients with laboratory-confirmed Covid-19; these patients had a wide spectrum of disease severity. If one assumes that the number of asymptomatic or minimally symptomatic cases is several times as high as the number of reported cases, the case fatality rate may be considerably less than 1%. This suggests that the overall clinical consequences of Covid-19 may ultimately be more akin to those of a severe seasonal influenza (which has a case fatality rate of approximately 0.1%) or a pandemic influenza (similar to those in 1957 and 1968) rather than a disease similar to SARS or MERS, which have had case fatality rates of 9 to 10% and 36%, respectively.“

It is not over yet, but this is much less than what our hysterical media and politicians have led us to believe. In the beginning of this historic, media-fueled panic, it sounded like millions would die in the US alone and tens of millions, if not hundreds of millions, globally.

Ironically, the media panic referred to by Ana Laura Palomino García is being fuelled by Dr. Anthony Fauci, who is playing a central role as a spokesperson in mainstream media reports.

His analysis in the New England Journal of Medicine is in sharp contrast with some of his frenzied statements on network TV, often taken out of context and/or misquoted by the media including press reports and headlines.

Dr. Anthony Fauci  is described as America’s trustworthy voice on coronavirus,  “often correcting President Donald Trump” who compares the COVID-19 to the Seasonal Flu. But isn’t that what Fauci is doing in his NEJM article. (In that regard Trump’s comparison is correct).

“Over the weekend, Fauci told CNN that the pandemic could ultimately kill between 100,000 and 200,000 people in the US should mitigation be unsuccessful.”

“Serving a president who initially dismissed coronavirus by comparing it to seasonal flu, Fauci has been even-handed in public.” (emphasis added)

Fauci is by far  a CNN favorite, providing “authoritative” statements on the virus:

Fauci tends to contradict himself.

He certainly does not inform Americans in a cautious way. He does not reassure Americans.

His authoritative statements often have no factual backing. 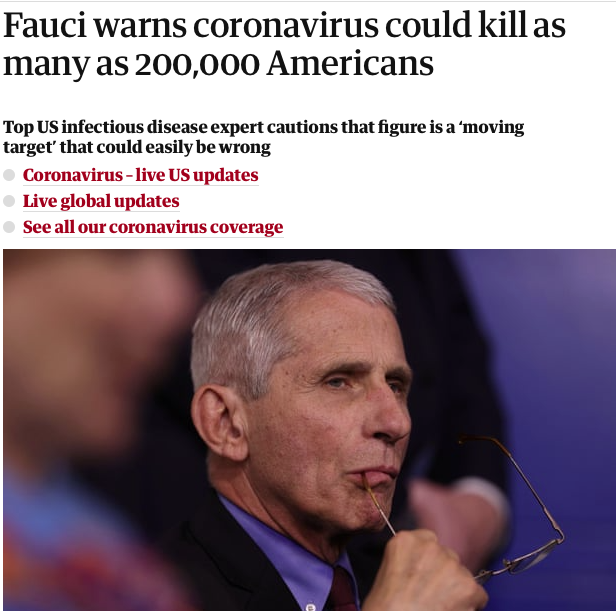 He not only misleads Americans, he fails to acknowledge the statements of the WHO which confirm unequivocally that:

The most commonly reported symptoms [of COVID-19] included fever, dry cough, and shortness of breath, and most patients (80%) experienced mild illness. Approximately 14% experienced severe disease and 5% were critically ill. Early reports suggest that illness severity is associated with age (>60 years old) and co-morbid disease. (largely basing on WHO’s assessment of COVID-19 in China)

The Hill, March 19, 2020
Michel Chossudovsky, Global Research, March 31, 20120
****
Thanks to Ana Laura Palomino García for having brought the NEJM article to our attention
Featured image: Anthony Fauci (R), director of the National Institute for Allergy and Infectious Disease and Dr. Anne Schuchat of the U.S. Centers for Disease Control and Prevention speak with reporters during a press briefing about the Zika virus at the White House in Washington February 8, 2016.  REUTERS/Kevin Lamarque
By Ana Laura Palomino García and Prof Michel Chossudovsky
Global Research, May 01, 2020

Source: Dr. Anthony Fauci: COVID-19 “May Turn Out to be Like a Bad Flu Season”. His Peer Reviewed Article Versus His Public Statements – Global ResearchGlobal Research – Centre for Research on Globalization

The people suffer from famine because of the multitude of taxes consumed by their superiors. - Laozi